It is well known that communication is one of the top crucial skills of leadership. By mastering this skill, leaders can persuasively engage with people within and outside their organization to ultimately build trust, the critical component of successful leadership. It is also well known that effective leaders use skilled communication to give voice to a compelling mission and a powerful set of values. By doing so, leaders create a meaningful picture of the future. Such a picture is pivotal to direct behavior that leads to the desired outcome. Now, a new article emphasizes the validity of these principles. 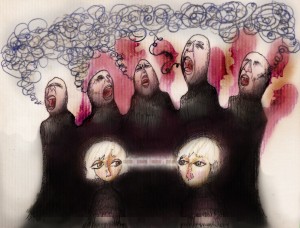 According to the article, the language of leaders has a profound effect on the performance of their employees—how a company presents its vision and values is deeply entwined with its overall success. While in many cases companies use abstract and vague language for their mission statements, the best-performing organizations frequently operate under a vivid statement.

Examples of vague statements are those used by many banks: “We will be the preferred provider of targeted financial services. We will strengthen these relationships and provide the right solutions.”

On the other hand, an example of strong mission statement is the one developed by Toys ‘R Us: “Our vision is to put joy in kids’ hearts and a smile on parents’ faces.” Jonathan Clark, one of the two authors of the article, said in a press release: “Everyone can imagine a kid, everyone knows what joy feels like and everyone can imagine a parent with their child smiling, That’s what makes something vivid: when you have concrete objects and behaviors that people can actually imagine in their minds.”

In their article, the authors suggests that purpose statements infused with the “right” kind of language can improve cooperation and coordination, and describe the “right” kind of language as consisting of two combined key elements. The first element is concrete, image-based language centered on the organization’s long-term goals. The second element is focused conceptual language centered on the values of the organization. The authors point out that carefully crafted messages that include these two elements can have a powerful impact not simply by effectively communicating a meaningful purpose, but by doing so in a way that creates a shared sense of that purpose across individuals in the organization.

“A leader provides focus for people and points them toward a specific set of values that guide action within the organization,” said Clark in the press release. He added: “In that sense, the language that leaders use is absolutely critical.”