What Makes a Creative Leader?

From “The only definition of a leader is someone who has followers” (Peter Drucker) to “Leaders will be those who empower others” (Bill Gates), there are plenty of convergent and divergent thoughts, ideas, and beliefs that have been used to answer the question: “What makes a leader?”

Indeed, “What makes a leader?” is the title of an influential article published in 1998 by the Harvard Business Review. In the article, Daniel Goleman—author of the book “Emotional Intelligence“—explains how truly effective leaders are distinguished by a high degree of emotional intelligence, which includes self-awareness, self-regulation, motivation, empathy, and social skill. Since then, emotional intelligence has been gaining increasing consideration in popular culture, the academic community, and the business world. However, there is still ample debate on what makes a leader. 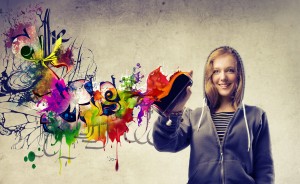 But, what makes a creative leader? According to a new study, the key quality of a creative leader is creative self-efficacy, defined as ‘‘a self-belief that one has the ability to produce creative outcomes.” In other words, teams produce more creative outcomes when their leaders have greater confidence in their own creativity. The study (I can do it, so can you: The role of leader creative self-efficacy in facilitating follower creativity) analyzed a sample of 544 employees nested under 106 supervisors at a large U.S. information technology company. The study results suggest that leader creative self-efficacy (a leader attribute) promotes leader encouragement of creativity (a leader behavior), which will in turn motivate employees to engage in creative processes (a follower behavior) and, ultimately, improve their creativity (a follower outcome).

Thus, the study results highlighted that a leader’s creativity and confidence is contagious. Dina Krasikova, one of the study authors, said in a press release: “A factor in this is the power of positive thinking, Leaders can imbue their subordinates with confidence and creativity just by setting an example themselves.”

On the basis of their results, the study authors suggest that organizations that value employee creativity should develop leadership programs centered on fostering leaders’ confidence in producing creativity, thus using valuable resources to improve leader creative self-efficacy which, in turn, will be beneficial to both leader and follower creativity. In addition, the study authors suggest that organizations launch intervention programs that strengthen relationships between leaders and followers—as for example one-on-one mentorship/coaching and social events, which can help connect employees with leaders. The suggested intervention programs should be based on frequent social interactions that facilitate quality conversations, mutual understanding, and meaningful connections between leaders and followers.