April 4—Equal Pay Day—is the symbolic day dedicated to raising awareness of the gender pay gap.  Here are some worrisome facts (and a few good news) provided by the National Committee on Pay Equity as of April 4, 2017:

“While the gender wage gap has narrowed, it has not changed statistically in the last year, according to data released by the U.S. Census Bureau on Sept. 13, 2016.  Based on the median earnings of all full-time, year-round workers in 2015, women now make 79.6 cents for every dollar men make, a change from 78.6 cents the previous year. Women’s earnings in 2015 were $40,742, while men’s were $51,212.  Rounding off the figures shows women’s earnings now at 80 percent of men’s, compared to 79 percent last year. 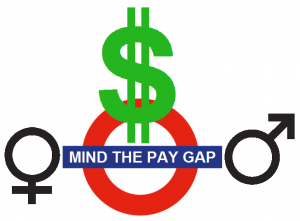 A 2016 guide to the gender wage gap shows the gap increasing as women earn more.  The loss in lifetime earnings is $530,000 for the average woman and $800,000 for college-educated women. About 30 percent of the narrowing of the wage gap since 1979 was caused by the decline in men’s wages.”

One of the industries known to be riddled with gender gap issues is the tech industry.  Now, a new study on tech companies.  “2017 Women, Work, and the State of Age Inequality“, carried out by Hired, a jobs marketplace for tech workers, shows that 63% of the time women receive lower salary offers than men for the same job at the same company.

Furthermore, women ask 4% less than men on average.  However, on a more positive note, results show that the situation is different for women at early career stages.  Indeed, female candidates with four years of work experience or less ask for more money than their male counterparts—and they get it.  Women with less than one year of experience ask for about 4% more money than men, and are ultimately offered an average of 8% more.  The wage gap starts to appear for candidates with more than six years of experience.

What may cause this gender pay gap?  Most likely a combination of unconscious bias during the interview process, and compensation policies that determine a candidate’s salary based on what he or she was previously earning.  The effects of gender bias also influence access to opportunity—53% of the time, companies interview only male candidates for a given role, whereas they interview only women just 6% of the time.

The study aims to empower companies and job candidates to close the gap.  The hope is that the tech industry will revise compensation policies, while job candidates will be empowered by the data-based information they need to ask for a salary that reflects their market value.