In a College Biology Class, Women Were Far More Likely to Underestimate Their Own Intelligence Than Men

By now almost everyone is aware that women are underrepresented in many STEM fields. There are some exceptions, though. One of them is biology. Back in 2011, an article in The New York Times aptly titled “Where the women are: biology” pointed out that women in STEM are clustered in the life sciences. In the article, Paula E. Stephan, an economist at Georgia State University, said: “Women historically have been interested in subjects that were less math intensive and that had goals of helping people, and biology and the medical sciences have both of those.”

It’s not surprising, then, that more than 60% of biology majors and 50% of biosciences graduate students are female. These numbers may lead to think that biology is one of the STEM fields that does not face gender inequality. However, a few years ago a large study of gender differences in introductory college-level biology courses found evidence of gender-based gaps in both achievement and class participation. 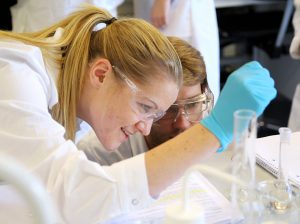 The study (Gender Gaps in Achievement and Participation in Multiple Introductory Biology Classrooms) was published in 2014 and found that despite numerical dominance of females, gender disparities remain an issue in introductory biology classrooms. Specifically, the study showed that female students consistently underperform on exams compared with males with similar overall college grade point averages. In addition, although females on average represent 60% of the students in these courses, their voices make up less than 40% of those heard responding to instructor-posed questions to the class, one of the most common ways of engaging students in large lectures.

Sarah Eddy, a co-author of the study, said: “Introductory biology classes are the first opportunities for many students to interact with professionals and peers in their intended fields. This is a critical opportunity to build up their confidence so that they can succeed in the field. Part of building that confidence is gaining recognition from their classmates and instructors. If females aren’t heard as often as males, they don’t have the same opportunity to succeed as biology majors.”

Now, results from a new study (Who perceives they are smarter? Exploring the influence of student characteristics on student academic self-concept in physiology) published yesterday (April 4, 2018), show that gender greatly impacts students’ perceptions of their own intelligence, particularly when they compare themselves to others. Specifically, the results show that in a college biology classroom, women are far more likely to underestimate their own intelligence than men. Men perceive themselves as smarter, even when compared to women whose grades prove they are just as smart. In addition, male students are more likely than females to say they are smarter than the person they are working with, regardless of whether their class partners are men or women.

Although the study was based on students in a single class, it highlights how differently men and women in science perceive their abilities, potentially leading to differences in confidence, motivation, and participation.

Sara Brownell, one of the study co-authors, told The New York Times: “It’s not simply enough to count up the number of students in the class and say, ‘Well, we have representation of women; women’s experiences in biology are exactly the same as men,’ because what we’re seeing is they’re not.”

Katelyn Cooper, another study co-author, said in a press release: “This is not an easy problem to fix. It’s a mindset that has likely been engrained in female students since they began their academic journeys. However, we can start by structuring group work in a way that ensures everyone’s voices are heard. One of our previous studies showed us that telling students it’s important to hear from everyone in the group could be enough to help them take a more equitable approach to group work.”