Why are women underrepresented in many science, technology, engineering and mathematics (STEM) fields? Despite much debate, there are not clear answers to this question. In addition, there are not convincing explanations for the so-called “leaky pipeline” effect, which results in a progressively dwindling number of women in STEM from the undergraduate level to the most senior career positions—an effect particularly apparent in academia.

To understand the low representation of women at the senior level in STEM fields, increasing attention has been placed on the role that women play in science-related activities. For example, women are less likely than men to secure prestigious research grants or be the senior author of peer-reviewed articles. A recent study pointed out gender imbalance at scientific conferences, where invited speakers are mostly men. 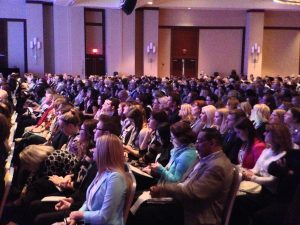 Now, a new study (published in the journal PLOS ONE on October 16, 2017) highlights that there is gender imbalance even in terms of behavior—at a scientific conference, men asked more questions than women. For this study, scientists compared the question-asking behavior of men and women researchers during 31 sessions across four days at the 2015 International Congress for Conservation Biology. The conference included more than 2000 attendees and had a clear code of conduct, which promoted equality and prohibited any form of discrimination.

Amy Hinsley, lead author of the study, said in a press release: “Previous research has shown that men are more likely to be invited to speak at conferences, which is likely to lead to them having a higher social reputation than their female peers. If women feel that they are low status, and have suffered discrimination and bias throughout their career then they may be less likely to participate in public discussions, which will in turn affect their scientific reputation. This negative feedback loop can affect women and men, but the evidence in this study suggests that women are affected more.”

Alison Johnston, senior author of the study, said: “We want our research to inspire conference organizers to encourage participation among all attendees. For example, questions over Twitter or other creative solutions could be tested. Session chairs could also be encouraged to pick participants that represent the gender in the audience. However, these patterns of behavior we observed are only a symptom of the bigger issue. Addressing this alone will not solve the problem. We should continue to research and investigate the underlying causes, so we can implement actions that change the bigger picture for women in science. If we are to level the playing field for women in STEM the complex issue of gender inequality has to stay on the agenda.”