Gender diversity at scientific conferences—especially as it relates to invited speakers—continues to generate attention and debate.  Why?  Despite the increasing number of reports and public discussions pointing out to the paucity of women scientists invited as speakers, gender imbalance persists.  A newly published study (April 18, 2017) shows that this imbalance is conspicuous in the field of neuroimmunology. 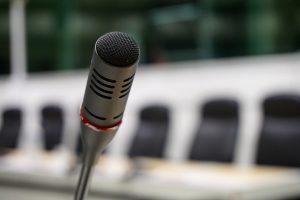 Conferences promote the exchange of data and ideas, and this exchange advances the field.  At the same time, speakers are provided with opportunities for advancement—they not only gain national and international recognition, but also increase their potential of recruiting young scientists to work in their laboratories.  Thus, accomplished women scientists that are not invited as speakers may miss important advancement opportunities.

The study also found that female scientists were rarely invited because they were overlooked by the conference organizing committees, contrary to claims that male scientists accounted for most of the speakers because they were producing higher quality work when compared to female scientists.  Indeed, the study found that women neuroimmunologists of requisite scientific productivity do exist and that their inclusion would achieve gender balance in speakers invited at the conferences analyzed in the study.

Furthermore, the study suggests that speaking out about gender balance makes a difference.  In other words, it is important to notice whether or not women scientists are being overlooked because of unconscious bias.  Unconscious bias could be present not only in terms of gender, but also in terms of race, ethnicity, and other.  The solution to this problem involves bringing such biases to light—this helps reduce their impact.  As Robyn Klein, lead author of the study said in a press release:  “Naming the problem is the first step in solving it.”  Organizers of a conference with gender balance in invited speakers were able to reach it through direct efforts to avoid unconscious bias.  These efforts included recruitment of women to the conference organizing committee.