“Mathematical Confidence” and Women in STEM

STEM (Science, Technology, Engineering and Mathematics) jobs are often referred to as the jobs of the future. According to the White House Office of Science and Technology Policy, there is currently a mismatch between the supply and growing demand for workers skilled in STEM. While economic projections indicate that there could be 2.4 million unfilled STEM jobs by 2018, it is well recognized that women represent a largely untapped STEM talent pool.

Indeed, women are underrepresented in STEM, and encouraging more women to enter STEM careers could help to fill the gap between supply and demand. However, women are underrepresented not only because of an insufficient number of women entering the STEM trajectory path, or STEM pipeline, but also because this pipeline is broken at major junctions—from middle school to high school, from high school to college, from starting college to completing a STEM degree, and so on. Although recent research suggests that the broken (or leaky) pipeline metaphor is now wrong for nearly all postsecondary pathways in science and engineering, other junctions could still be underlining a “leaky” situation for a variety of reasons. 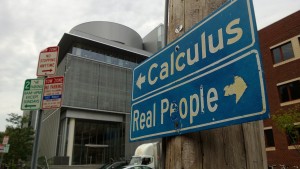 Now, results from a new study show that women are 1.5 times more likely to leave the STEM pipeline after entering college because of Calculus I, the first in a sequences of introductory calculus courses that college students take as a necessary first step on the way to obtaining a STEM degree. Indeed, it is widely known that introductory math courses, such as Calculus I, are major obstacles in pursuing a STEM career, and influence students’ decisions to leave STEM majors.

For the study, researchers asked students across the country about their interest in and intention to pursue a STEM degree, their test scores, preparation, learning experience, plans and backgrounds—before taking Calculus I and after. Students either persisted or switched out of the calculus sequence after taking Calculus I. Students who persisted were considered as continuing to pursue a STEM major, whereas those who switched out were considered as dissuaded from STEM disciplines.

Students who switched out after Calculus I were asked why they decided against taking Calculus II. Most of the possible explanations fell fairly equally across the genders (too many classes, not needed for major, etc.)—except for one: “I do not believe I understand the ideas of Calculus I well enough to take Calculus II.” Of those who had been planning to major in a STEM area, 35 percent of women who switched out listed this as a reason, whereas only 14 percent of men did. However, fewer than one in five of the departing students of either gender reported that their Calculus I grade was actually too low to continue. These results suggest that a major factor in women’s decision to leave a STEM path after Calculus I isn’t ability, but confidence in their ability—in this case “mathematical confidence”—or its lack thereof.

Bailey Fosdick, one of the study authors, said in a press release: “When women are leaving, it is because they don’t think they can do it—not because they can’t do it.”

The study results also indicate that if women persisted at the same rate as men starting in Calculus I, the number of women entering the STEM workforce would increase by 75%. The authors recognize that it is preferable to increase girls’ and women’s interest in STEM at all life stages. However, they point out that targeting efforts at women—to improve their chances to do well in college calculus and beyond, would increase the incoming general STEM workforce (men and women) by 20%, thus helping to meet the growing demand for STEM-skilled workers.