“The workplace, like almost all places where people interact, can be a petri dish of conflict.  Offensive remarks, unrealistic demands, people taking credit for others’ work, bullying—the transgressions that occur can take many forms.  They also have the potential to escalate out of control and permanently damage relationships.”  Indeed, conflict in the workplace includes bullying.  Although bullying and cyber bullying are generally viewed as a phenomenon that takes place mostly among children and adolescents, bullying frequently occurs among adults. 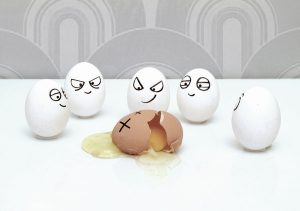 According to the Workplace Bullying Institute, workplace bullying is repeated, health-harming mistreatment of one or more persons (the targets) by one or more perpetrators. It is abusive conduct that is 1) threatening, humiliating, or intimidating or, 2) causes work interference—sabotage—which prevents work from getting done or, 3) includes verbal abuse.  Workplace bullying is also defined as the repetitive and systematic engagement of interpersonally abusive behaviors that negatively affect both targeted individual and work organization.

Now, results from interdisciplinary research carried out by researchers at Aarhus University and at the University of Copenhagen show that men and women are similarly exposed to workplace bullying, with both genders reporting immediate negative health effects.  Men, however, are slightly more exposed to physical intimidation than women.  Interestingly, the researchers found that, in women, workplace bullying leads to a doubling of sickness absence, resulting in increased use of antidepressants and affecting women’s health negatively and for a long time. On the other hand, men are twice as likely to leave the labor market for a period of time after they have been subjected to bullying.

Tine Mundbjerg Eriksen, lead author of the study, said in a press release: “The million-dollar question is why men primarily react by leaving the workplace, while women react to bullying by taking prolonged sick leaves.  If anything, this illustrates that men and women handle bullying differently.”

Given the serious consequences of workplace bullying on physical, emotional, social, and economic well-being, it is necessary to promptly identify its signs.  In an article from last year, Joyce E. A. Russell lists some of the signs that a person is being bullied at work:

• Being excluded from team meetings or not being put on the schedule for important meetings (“Oh didn’t I put you on the boss’ schedule?”)
• Not receiving all of the necessary information to do the job effectively (“Oh, I didn’t give you that report last week… are you sure about that?”)
• Someone consistently taking credit for your work (“I created and organized the event” when it was a team project)
• Being gossiped about or someone spreading false rumors about you
• Someone sabotaging your work
• Someone belittling your work (“he/she only worked a few hours on this project”)
• Someone swearing or yelling at you in a public venue
• Scathing or inflammatory emails blaming you for a problem or issue
• Bringing up your mistakes over and over again (especially in front of others)
• Isolating you by not being accessible or limiting your access to others
• Micromanaging you and thereby showing distrust in your skills no matter how successful you have been

What can be done about workplace bullying?  The answer is to take immediate action.  However, immediate action can be taken only if everyone within an organization is trained to recognize bullying and knows how to report it.  Additional training and support should be provided on how to recover from bullying and how to prevent it.